What is the Probability of ITM 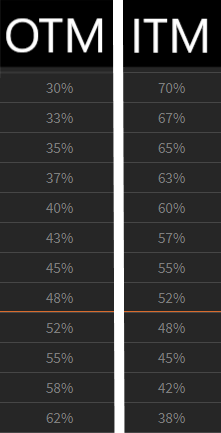 What is the Probability of OTM

In other words, when selling options, you should ideally find options that don’t have a too low probability of expiring worthless/OTM.

What is the Probability of Touch

XYZ is trading at $100 and you decide to buy the 110 call option that has a 30% probability of ITM. The probability of touch for this option will be around 60%. This means that the theoretical probability that XYZ’s price will rise to $110 sometime before expiration is around 60%.

Here is yet another example to clarify this:

ABC is trading at $45 and you sell the OTM put option with a strike price of 38. The probability of OTM for this option is 70%, which is fairly high. In other words, there is a 70% probability that ABC’s price will be above $38 on the expiration date.

Many option trades show a paper profit sometime before expiration. However, if you manage to hold on to them, they often turn around. Therefore, the trading approach ‘cut your losses quickly and let your winners run’, is not applicable to options selling.

Nevertheless, you shouldn’t hold on to losers forever, especially if you are trading undefined risk strategies. Always define your risk before opening a trade and then stick to this max risk level. Just make sure to give the underlying’s price some room to move, so that your losing trades still can turn around and become winners.

What is the Probability of Profit (POP)

Let’s go over another example:

You sell a call (credit) spread on XYZ (XYZ is currently trading for $265). The short strike of the call spread is 270 and you collect $1 for the entire spread. This means that your breakeven point is at $271. Let’s say the probability of profit is 65%.

This means that the probability that XYZ’s price will expire at least one penny below $271 is about 65%. If XYZ’s price is at $270.99, the call spread won’t reach max profit.

P50 is another very useful probability. It shows the probability that your trade will reach 50% of max profit (for defined risk trades). I have only seen this probability displayed on the broker platform tastyworks. Most other brokers probably don’t have this feature.

A wide variety of different backtests from tastytrade have shown that taking profits at 50% of max profit is ideal for most short option strategies. That is also why they show you the probability of reaching 50% of max profit.

The probability of reaching 50% of max profit usually is higher than the POP. This is the case because 50% of max profit normally is reached before the expiration date and therefore, the trade can be closed earlier.

This is how tastytrade describes their P50 calculation:

“The p50 feature takes the trade you’ve loaded onto the trade page and runs it through a monte carlo style simulation, and calculates the theoretical probability that your position reaches 50% profit over 10,000 occurrences.”

How to use the different probabilities

Now you know what the different probabilities mean. However, you don’t necessarily know how to use the probabilities for your trading. That’s what we will get into now.

The probabilities of ITM/OTM can be used to give you an idea of what price movement the market expects from an asset. Furthermore, you can use these probabilities for the strike selection. For instance, when you are setting up a credit spread, you can look at the probability of OTM to find a fitting short strike.

The probability of profit gives you an idea of the likelihood of winning on a trade. POP takes another important factor, namely premium into account and therefore, you should rather look at POP than at the probability of ITM/OTM.

So the probability of profit is one of the most important aspects to look at before sending an opening order for a trade.

The probability of reaching 50% of max profit (P50) can also give you great insights into a trade, especially if you are planning on taking profits at 50%. However, if you put on a trade because it has a high p50 number, you should not try to go for max profit. P50 is especially useful for option premium sellers. Generally, it is a very good idea to take profit at 50% of max profit on most short option strategies like credit spreads, short iron condors, short strangles etc.

Just because the underlying’s price moves against you, does not mean that it can’t turn back around. Just make sure to define your risk before putting on a trade so that you protect yourself.

Here is a brief example of all the probabilities on a call credit spread:

The underlying asset is QQQ and was trading at $171.5 at the time of making this example trade.

As you can see on the image above, the probabilities are:

Here is an infographic that displays the probabilities of the call credit spread visually:

(If you want to use this infographic, go ahead. Just make sure to link back to this article.)

Hopefully, this example helps you with the understanding of the different probabilities.

Just because a trade has a high probability of profiting, does not mean that it is a good trade. Make sure to always look at other essential factors like max profit, max loss, risk to reward ratio, implied volatility, days to expiration… as well.

For instance, a trade with a 90% probability of profit might sound good. However, if that trade only has a max profit of $5 and its max loss is $1000, the trade is bad!

Normally the following is the case: the higher the probability of profit, the lower the max profit and the greater the max loss.

So make sure to look at the probabilities AND other important factors!

Hopefully, you found this article helpful and learned how the presented probabilities can improve your trading performance. Sadly, not all brokers show these probabilities. On the following image, you can see that all of the probabilities can be displayed on a single page within tastyworks:

That is why I use tastyworks, the only broker I know that shows all of the above probabilities.

If you want to learn more about tastyworks, make sure to read my tastyworks review!