This is the second live option trade example/case study. This example will once again be an example of a good and profitable credit spread. Throughout this article series, you probably won’t always find examples of very many different strategies. Most examples will probably be credit spreads and iron condors. The reason behind this is that these are the strategies that I trade the most. I don’t trade any other (directional) strategies very often compared to these two strategies. Additionally, this gives you a more realistic insight into my trading. If I would post tons of articles with different live option strategies, that would give you a wrong impression of my trading. Furthermore, I am mainly using a very small trading account for these live trade examples to show that it actually is possible to make money trading options in a small account. Nevertheless, I will try to write about different strategies to give you a little more diversity.

Before I start with the actual trade, I want to say that all the trade examples including this one were performed inside of the broker platform Tastyworks. If you want to learn more about Tastyworks, you should read my Tastyworks review.

Now let us get into the trade itself. First of all, I will tell you about which underlying asset I chose and why I chose it. For this credit spread, I chose the SPDR S&P 500 ETF Trust (ticker symbol: SPY). This ETF basically tracks the S&P 500 which consist of the 500 ‘best’ US stocks. SPY is often referred to as the market index/the market. This ETF is extremely well known and is insanely liquid. Many million shares of SPY are traded every day. But not only SPY itself is very liquid, but SPY’s options are as well. SPY has really many options and most of them are very liquid too. Even some ‘random’ weekly, ATM contracts often have volume in the thousands. This makes SPY a very good underlying. In fact, I would go as far and say that SPY is probably the best underlying for option trading. Here are a few reasons why:

Besides the fact that SPY is a great underlying alone, a reason why I chose it was because of its implied volatility (IV) Rank. SPY’s IV Rank when entering was around 35-40. I know this is not in the very high range. But compared to SPY’s and other large ETFs volatility over the past few months, this is actually quite high. Moreover, I have begun to still sell options even if IV isn’t insanely high. This is because if you don’t do this you miss out on so many great opportunities and restrict yourself. Another reason for SPY was because I could find options with great pricing.

As said earlier, this trade was a Credit Spread. I chose to do a credit spread before I chose SPY as an underlying. The only question remaining after the choice of an underlying was if my credit spread should be bullish or bearish. Eventually, I went for a bearish call credit spread. The reason for that wasn’t really because of any technical or other analysis. It was mainly because the calls just had better pricing than the puts (this is often the case). In addition to that, SPY actually just had a small rally up, so a bearish/neutral position could definitely not hurt. In a bigger account with many positions on at a time, the market assumption should also be influenced by your portfolio.

When I trade credit spreads, I never really trade them very directional. I always go for further OTM strike prices so the underlying price has room to move in. This also increases the probability of profit. SPY was trading for around 246.6$. I went for a weekly contract with 18 days left until expiration. My exact setup was:

The reason why I chose these contracts was that they seemed to have one of the best pricing and they weren’t too far/little OTM. As you can see, I only went for a 0.5$ spread between the two options. That’s because this minimizes the max loss which is good for small accounts. The small account size is also the reason why I only went for 2 contracts (of each option). This trade would still be good for larger accounts (just adjust the number of contracts). My max loss was 29$ and the max gain was 21$ (per contract, so 2x for two contracts). The probability of profit (POP) was around 65%. Before every single entry I make this calculation:

If this calculation is greater than zero, the price is good enough for me. Otherwise, I either adjust the price or don’t make the trade. This was the calculation for this credit spread:

As you clearly can see, the result is greater than zero, so the pricing is good. Therefore, I went on to ordering and was filled instantly (because of SPY’s amazing liquidity). Directly after the entry, I sent out a GTC order at 0.09$ which is ca 55% of the max achievable profit on this credit spread. My profit target for credit spreads is almost always 50-60%.

To be profitable on this trade SPY’s price was not allowed to surpass 248.5$. In other words, I would be profitable if SPY’s price would fall, stay the same or even rise a little. If the price would fall, I would be profitable much quicker. Otherwise, if the price would rise up to 248$ until the expiration date, I would still reach max profit. In addition to that, the option Greek Theta/time decay was also working in my favor meaning that no matter what, my credit spread would gain a little value every day. The gained value would become higher, the closer the options are to expiration.

On the first day in this position, SPY’s price went a little up and down. But after that day the price fell dramatically very fast. Therefore, my GTC order actually got filled relatively fast (after 2-3 days). I entered the credit spread for a credit of 0.21$ and closed it for 0.09$ debit.

The chart below indicates my entry-, exit- and break-even point. When looking at this chart after the trade, I just realized how good my entry and exit points actually were. 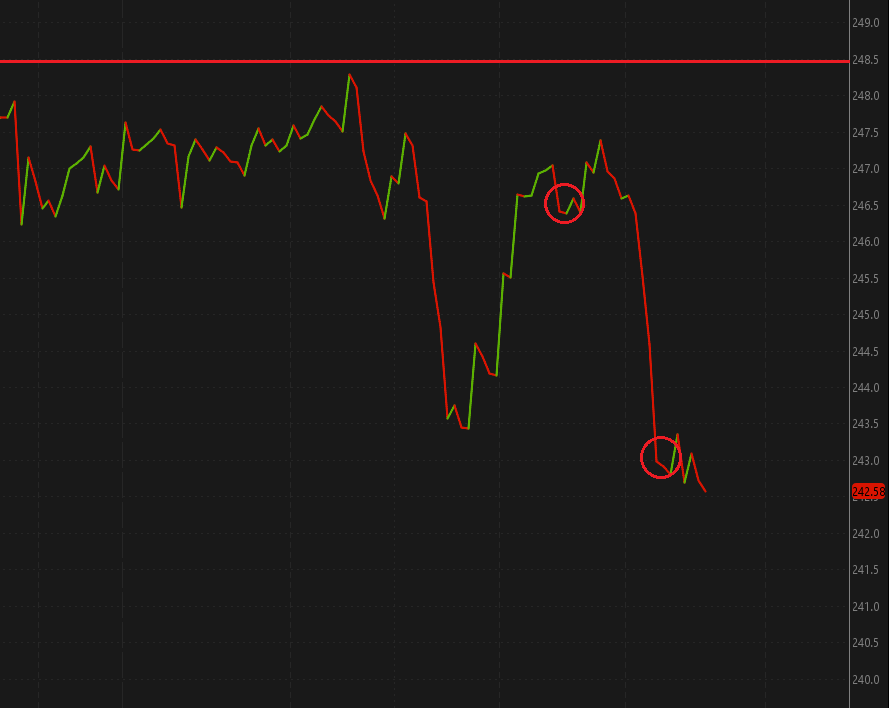 Once again, I can’t say more than that I got kind of lucky on this trade. The price fell very fast and my profit target was reached within no time. I got especially lucky with my ‘directional’ assumption. Even though I was a few strikes OTM, this would not have been enough if I would have gone for a bull put credit spread instead of a bear call credit spread. These kind of big moves in underlying’s are things that high probability option traders don’t want. High probability option traders want that the market won’t move a lot in one direction and around 70-80% of the time this assumption is correct. But sometimes like in this example, the underlying still does it. But luckily for me, I did not choose to do a bullish or completely neutral strategy. Otherwise, I may have ended with a loss (except if SPY’s price will rally up again in the next 10 days, which is not too unlikely either.)

Summed up, I think that this was a good trade. Here are a few of the most important things that made this a good trade:

Note that in my opinion a good trade is not determined by the profitability of a trade. If someone enters into a totally stupid position and somehow luckily this position generates a profit, I do not consider that a good trade. A good trade is a trade that is done with a systematic and planned entry and setup. The entry is the most important part of a trade!

This trade is another great example of how you don’t need a lot of money to start trading. This credit spread had an overall risk of 29$ (per contract). Therefore, this spread can be done in practically any account, no matter how big or small.