This is the first of hopefully many live option trade examples/case studies. In this series, I will present and walk you through some of my trades. As this is the first live option trading example that I will publish on this site, I chose to pick a very good/near perfect trade. I will tell you how I set up, entered, exited the trade to give you the best possible insight into my thought-process while doing all of this. The trade that I am going to present you in a few seconds will be a credit spread. This trade was inside of my very new and small Tastyworks brokerage account, therefore position sizing etc. were rather small. This trade could have been done in almost any account, regardless of size.

Let’s start with the general stuff like the underlying asset. As the underlying asset, I chose the iShares Russell 2000 ETF (ticker symbol: IWM). IWM tracks the performance of the Russell 2000 Index Fund (ticker symbol RUT) which measures the performance of around 2000 US small-cap companies that are inside of the Russell 3000 Index (3000 biggest U.S. stocks). This all may sound complicated, but most of it can be disregarded. Just think of IWM as a good and very liquid ETF. The reasons why I chose IWM were:

IWM was trading for around 141.5$. I chose two OTM strikes so that IWM still had some room to move in. This was my exact setup:

The probability of profit for this spread at entry was ca. 65% which is neither too high nor too low. The reason why I only chose such a narrow 0.5$ wide spread was that this would decrease the max drawdown. The max loss was 32$ and the max win was 18$. This was because I sent out a limit order at 0.18$ for the spread. I did not want to decrease this price more.

Before every entry, I multiply the probability of profit x the max win and do the same for the probability of loss and the max loss. Afterwards, I compare these numbers to check which one is higher. In this example, I made this small calculation:

If the result of the first calculation is greater than the one of the second calculation I try to make the trade. Otherwise, I either adjust the price or find a new setup (Learn why here). This was not the case for all credit spreads in IWM and that is why I ended with the September 08 weekly contracts that were around 32 days before expiration.

My position size ideally is always below 5%. As this account is very small, I only went with one contract (short and long), but I could have gone with 2 or maybe even 3 contracts. The max 5% position size should not change for bigger accounts.

Directly after I was filled, I sent out a GTC order to close the position automatically if it hits my profit target of 55% of max profit. As this was a very small position size and a defined risk trade, I did not feel the necessity to have an exit plan in case the trade would have gone against me.

I would have been profitable if the price of IWM would stay below 143.5$ until expiration. So IWM could either stay the same, go down or even go up a little and I would still be profitable. If the price would not go up, I could reach my profit target earlier. Time also worked in favor of this spread. Every day this position would have gained some value, just because time passed by. Usually, when I enter credit spreads, I just hope that time passes by and not too big moves happen. But with this credit spread things worked out perfectly. On the chart below, I marked the entry point with a red circle (the blue line shows the break-even point). 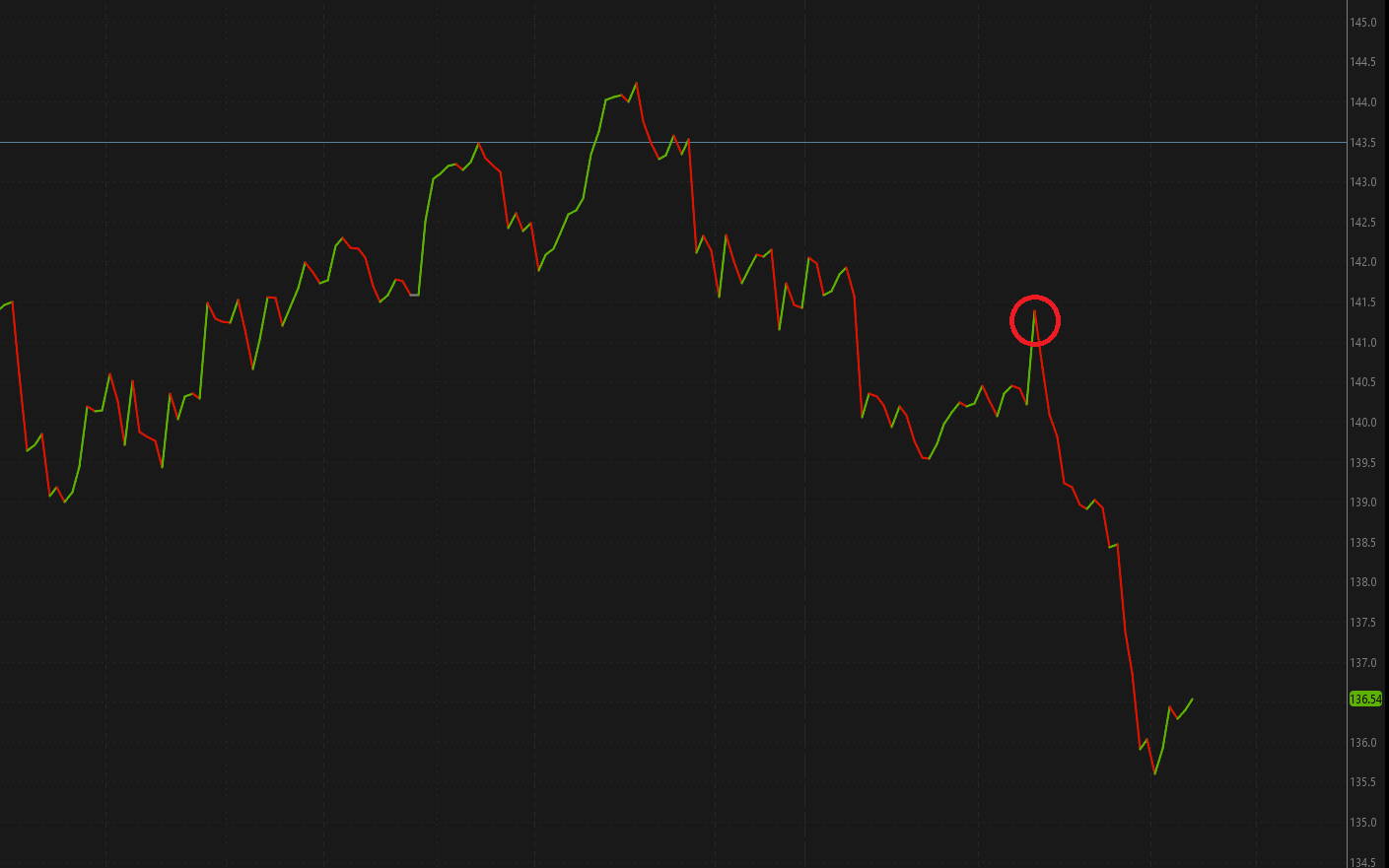 As clearly visible on the chart, the entry point was perfect. Literally minutes after the entry IWM’s price started to fall, leading to a near instantaneous profit in the spread. But as the position size was so small, I didn’t want to take the spread off before it reached my 55% profit target, so I held on to it. After only 2 days, my profit target was reached and the GTC order was filled.

I think this was a very good trade because it was profitable within a few minutes and reached 55% of its max profit after 2 days even though I entered the spread ca 31 days before expiration. My probability of profit changed from 65% to 77% after a few hours. I do realize that I probably could have gotten more than the 55% of max profit. This is often the case for spreads like these. But there are several reasons why I prefer to exit these strategies early (Learn them here). One big reason for this specific example would be that it is often not worth it to allocate your money for a much longer time just to get every single bit of money that you could make. For this spread to reach max profit, I would probably have had to wait more than two times as long as I did here. If you look at the chart, you can even see that IWM started to head up again, which would have decreased the current profit again. I’d much rather just take the money and reallocate it.

But how did I actually manage to time this so good?

Even though I could tell you whatever here, I’ll be honest and say that I simply got lucky. There was nothing else. I entered and got filled at the perfect time, just before the downfall. But I did not use any signals that told me when to enter or whatever. This does not mean that my entry on this trade was better than the one on another trade. I just had luck with its timing. But even if IWM would not have fallen so suddenly, I probably still would have hit my profit target, just not that quick. If you are consistent with your trading, you will sometimes get lucky. But you can’t win 100% of the time. You just have to consistently put on good trades. Sometimes you win, and a few times you lose. This doesn’t mean that one entry necessarily was better than another one. This is also the reason why you should keep your position size small. If you trade with huge position sizes and get unlucky, you will lose a lot of money.

This trade is also a perfect example that shows that you can make money even with a small trading account. You don’t need a huge account to be profitable. This trade had 32$ of risk. Almost any serious trading account can handle this. If you have a bigger account, you can always adjust the numbers of contracts to fit to your account. Nevertheless, no matter how big your trading account is, I do not recommend allocating more than 5% per (options) trade.

I hope you enjoyed this first live option trade example/case study. Many more articles like this one should be coming in the near future.

I Use Tastyworks For All My Trading. You Can Check Out My Tastyworks Review Here.