Trading through earnings announcements usually isn’t a good idea. During earnings, most stocks tend to either increase or decrease significantly in value. Predicting the correct direction isn’t more than a 50/50 bet. That’s why I can’t recommend trading stocks through earnings announcements. With options, however, you have many more possibilities. Options allow you to profit from an entirely different angle. I will present a way that will allow you to profit from trading options on earnings.

To fully understand everything discussed in the following article, you should already be familiar with basic option concepts (including the Greeks). If you aren’t, I highly recommend checking out my Free Options Trading Education.

What are Earnings Announcements

But first of all, what are earnings announcements? Earnings announcements are the events where companies publicly announce their earnings or in other words their net income (after-tax). This event can be very important for stocks because it reflects the health of a company and its performance. That’s also why stocks tend to make big moves on earnings.

Trading Options on Earnings – The Theory

With options, it is possible to profit from this very predictable drop in implied volatility.

How to Profit from the IV Crush

There are relatively many option trading strategies that allow you to profit from a drop in implied volatility. Straddles, Strangles, Iron Condors, Short Calls/Puts, Butterflies… just to name a few. However, there are only a few option strategies that are good choices for this purpose.

As we don’t want to bet on the direction of the underlying’s price, neutral strategies are the number one choice. But obviously, you could theoretically also choose a directional strategy if you have a certain direction that you think the underlying asset will move in. But note that this probably just will be a 50/50 bet.

Viable neutral strategies that profit from decreasing implied volatility are:

The following image shows the payoff diagram and some other features of a short straddle: 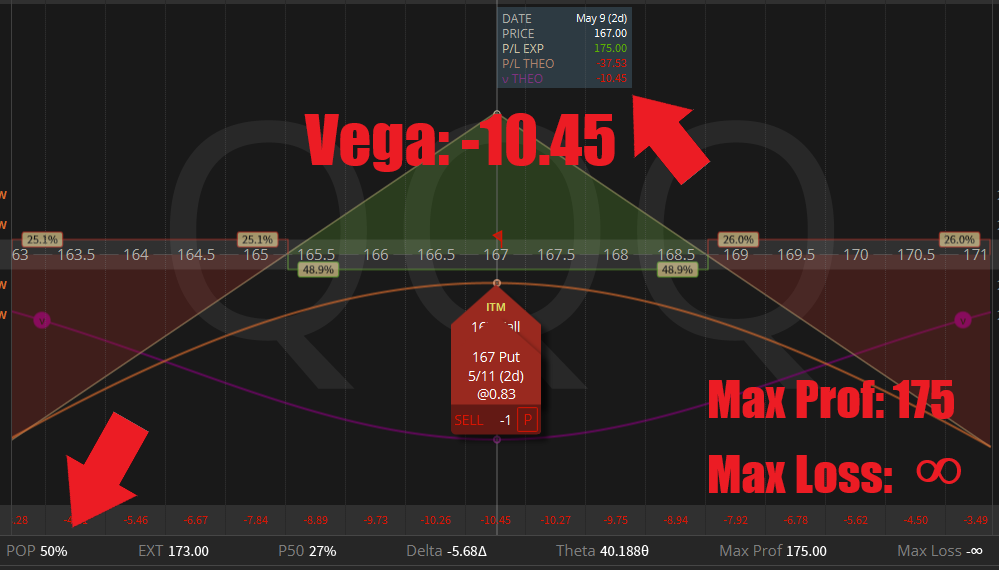 After an earnings announcement, implied volatility often drops by a lot. Therefore, strategies with a big negative Vega profit the most.

The Straddle above has a probability of profit (POP) of about 50% and a max profit of $175.

Short Strangles are another undefined risk and defined profit strategy. They consist of one OTM short put and one OTM short call.

Here is an image of the payoff diagram of a short strangle: 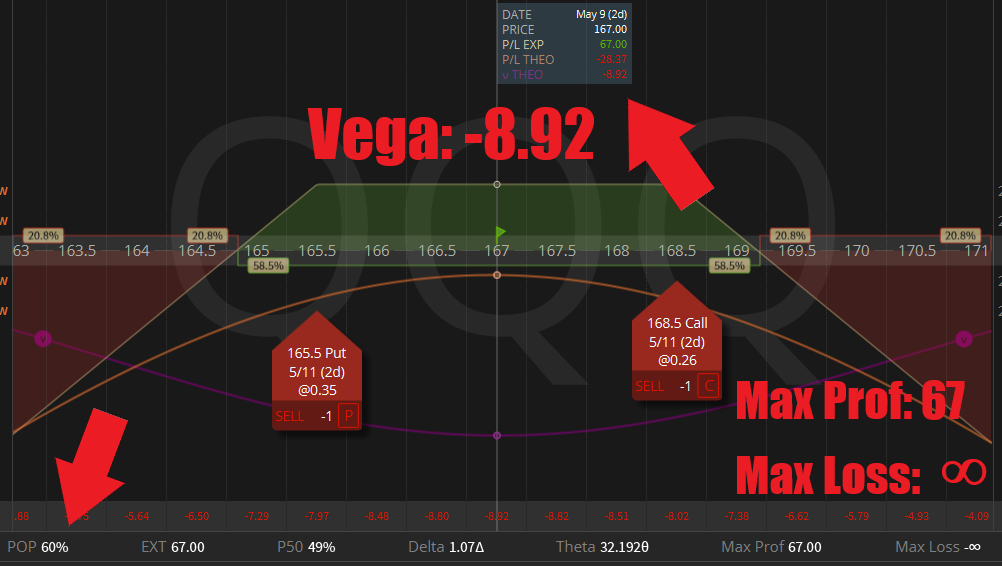 Iron Condors are a defined profit and defined risk strategy meaning that your risk (and profit) is limited. Once again, the following image shows the payoff diagram of an iron condor. An iron condor basically is a strangle with two long options added to each side to define the risk. 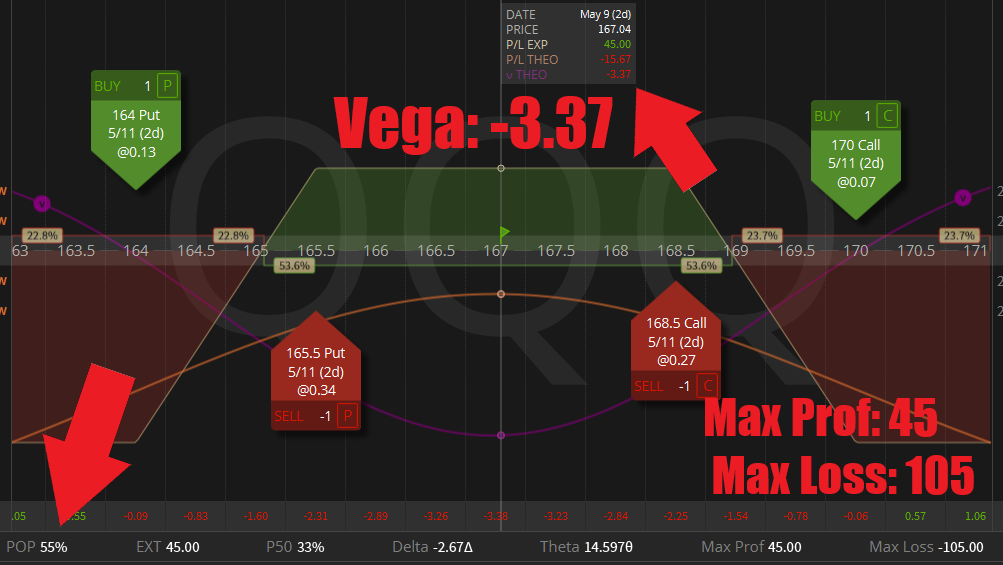 For this iron condor, the Vega is only -3.37. Therefore, this (and most other iron condors) profit much less from decreasing implied volatility than straddles and strangles. Furthermore, the max profit is only $45 which again is less than that of the other two strategies. The max loss, however, is not unlimited. It is capped at $105. The probability of profit of this iron condor is 55%.

As you can see, the three discussed strategies vary in different aspects: some profit more from decreasing volatility than others. Others, on the other hand, have a better probability of profit and so on. To compare these strategies, I created the following table. Each row compares a different aspect of these strategies. I marked the ‘winners’ of each aspect with green and the ‘loser(s)’ with red.

In my opinion, there is no clear winner here. Not one strategy is superior in every aspect. I think the strategy choice really depends on personal preferences like account size, risk tolerance…

All of the previous example strategies were on the same underlying asset. But note that implied volatility wasn’t very high at the time of creating this article. Therefore, the credit collected (max profit) wasn’t very high. In times of high IV, you should be able to collect much more. Thus, the stats will be better in times of high IV. In addition to that, you could have chosen different strike prices/expiration dates… This would again impact all of the above stats.

The three mentioned strategies are excellent choices for this strategy. However, this does not mean that they are the only possible choices. If you want to add a directional component to this trading style, you may very well do so. Just make sure that the strategy you choose has all of the following aspects:

How to Choose An Expiration Date:

The purple line indicates the earnings date of this stock. As you can see the expiration cycle directly after earnings, has the highest IV. This is because an unusual big move is expected during the earnings release. Over time, the move in the stock’s price normalizes itself and doesn’t become extreme, thus the IV of the other expiration cycles is lower. The IV of other expiration cycles can give you a great idea of how far IV can/will drop. For example, on the image above, the IV of the May 18 expiration cycle (closest to earnings announcement) was at 47.1% at the time of writing this. The IV of the Jun 15 cycle was only 29.9%. Therefore, a 17.4% drop in IV can be expected, but obviously, there is no guarantee that this will happen.

How To Choose Strike Prices:

When choosing strike prices, you should consider the expected move which can be calculated with options prices. Broker platforms like Tastyworks display the expected move directly on the option chain. This is a very useful feature. The following screenshot shows this feature: 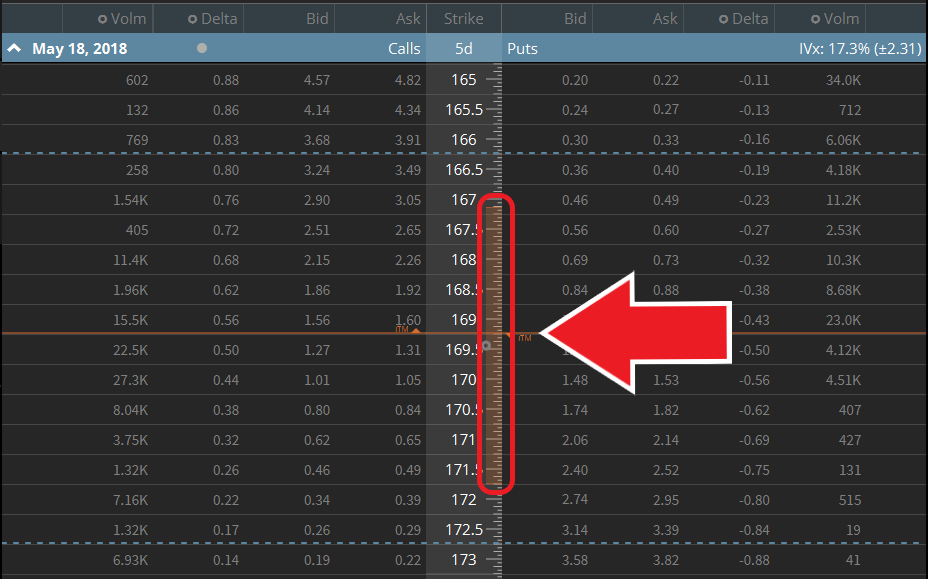 Ideally, your strategy should cover this expected move. But once again, this depends on your personal preferences. If you want to be extra conservative, you can go much further out to cover the expected moves multiple times. If you’re extra aggressive, you could do the exact opposite. But note, the further out you go, the higher your POP becomes. With a rising POP, your max profit decreases when going further OTM.

If you have a directional assumption, you could also just cover the move on one side.

The first example is the IV crush of Disney (DIS). As you can see, implied volatility dropped significantly as soon as the earnings were announced.

The next example is Chipotle (CMG). Once again, implied volatility dropped a lot shortly after the earnings release. The IV dropped by more than 10 points.

The following chart displays the implied volatility of Apple (AAPL). The same scenario as on the previous can be recognized.

The last example of this article is Amazon (AMZN). On Amazon, implied volatility was already down-trending from a previous event. Nevertheless, the IV rose a little up to the earnings release. Directly after it, IV dropped substantially.

All of the above charts are taken from marketchameleon.com

Trading options on earnings and trying to profit from this drop in IV during earnings is a good strategy. However, it is everything else than guaranteed. Often stocks move a lot around earnings. Therefore, it is important to keep position sizes small and to know what you are doing.

Remember that this strategy tries to profit from IV and it is not a directional strategy.