So without further ado, let’s get started.

What Is An Option Spread?

Before we get into the different kinds of options spreads that exist, it is important to understand what an options spread even is. So what is an option spread? 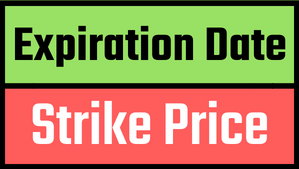 As you can see, the just-described options only differ in regards to strike price and opening transaction (one call option is bought and the other one is sold).

Let’s recap the characteristics of an options spread:

In other words, the options involved in an options spread only differ in regards to strike price and/or expiration date. This is the case for all options spreads, regardless of kind. So when I will walk you through all the different options spreads in a few moments, keep this in mind.

Even though the options involved in an options spread only differ in regards to 1-2 aspects, it is still possible to create a wide variety of different options spreads.

Watch the following video for a visual breakdown of option spreads:

What are vertical spreads? 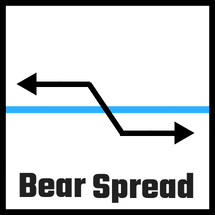 These four different vertical spreads can be ordered into different categories:

Here is how the four different vertical spreads are set up:

All vertical spreads are defined risk and defined profit strategies which means that you can’t lose or profit more than a certain amount. The amount of risk and potential profit depends on the width of the strikes and on the position of the strikes in relation to the underlying’s price.

To calculate the max risk and max profit of vertical spreads, you need one calculation:

What are horizontal spreads?

Horizontal spreads are options strategies that consist of the same number of long as short options that only differ in regards to the expiration date (on the same underlying asset). In other words, the options involved have the same strike price but a different expiration date.

Let me give you a concrete example to explain what a horizontal spread is:

The setup of these four different calendar spreads is relatively simple:

What are diagonal spreads?

Diagonal spreads are a combination of vertical and horizontal spreads. A diagonal spread is a strategy that consists of the same number of long as short options that have different strike prices and different expiration dates. 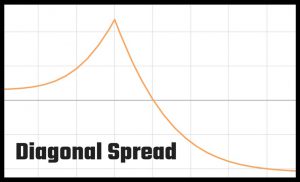 Just like I said before, diagonal spreads are a combination of vertical and horizontal spreads. This means that they try to profit from changes in both the underlying asset’s price and implied volatility/time. Diagonal spreads can be slightly to very directional strategies.

It is very important to understand what an options spread is and what different kinds of spreads exist. That’s why I want to recap some of the most important points of this article.

I created the following table to visually explain the different options spreads. Furthermore, this table actually reveals why the different spreads are called the way that they are (horizontal, vertical, diagonal). 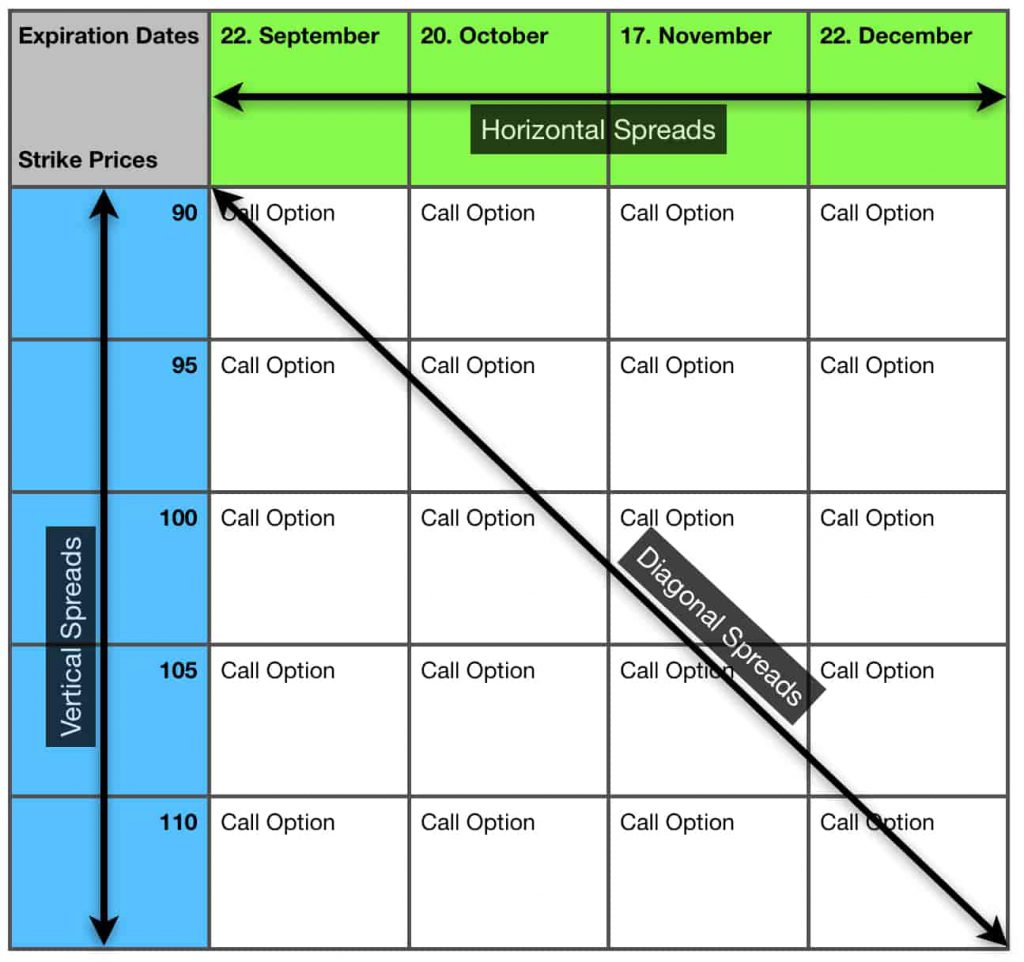 Now you should know what different spreads exist. But you might ask yourself the question, which of these spreads is best.

There is no one right answer to this question. Not one spread is better than another. It really depends on the current market situation and on personal preferences. For instance, if you are bullish on a stock and want to take advantage of an up-move, a bull call vertical spread might be a good strategy. However, if you want to profit from a rise in implied volatility and don’t have a certain directional assumption, a horizontal/calendar spread would probably be a better choice…

I hope you understand what I am trying to say.

In the introduction, I mentioned that if you fully understand options spreads, you will understand all options strategies. But why do I think this?

Let me give you a few examples:

You probably realized that vertical spreads are relatively simple (compared to other options strategies). They are a two-leg strategy that consists of a long call and short call or a long put and short put.

But what happens if we combine multiple vertical spreads?

You may or may not know the option strategy iron condors. It is a very good and popular four-leg options strategy. Due to its four legs, it is usually labeled as an ‘advanced’ options strategy. But in reality, it isn’t anything else than a combination of two simple credit spreads.

I created the following image to explain this concept visually.

Hopefully, you can see how a combination of a bear call spread and a bull put spread create an iron condor.

Now let me give you another concrete example. Butterflies are another options strategy often referred to as complex and thus, only suitable for ‘advanced’ traders. But just like with iron condors, butterflies aren’t very complicated either. They are simply a combination of a bear call spread and a bull call spread.

Hopefully, these two examples make it clear how options spreads are the building blocks of most options strategies. These were just two of many examples where this is the case.

If you want to learn more about options strategies and when to use which strategies, you might want to check out my free strategy selection handbook.

My goal with this article was to introduce you to options spreads and thereby build a stable foundation for options trading strategies. It would be awesome of you to let me know if I achieved this goal in the comment section below!

Furthermore, if you have any questions, feedback or other comments, please tell me in the comment section.